MUTTS Comes to ACC Along with Shelter Me

Award-winning artist and animal advocate Patrick McDonnell, creator of the MUTTS comic strip, turned his experience at Animal Care Centers of NYC (ACC), into a week’s worth of MUTTS comics called “Shelter Stories,” which ran in February, 2016. He was filmed during his time at ACC and featured in the national PBS series, Shelter Me Episode six, Hearts and Paws! Read the press release >>

The ACC Shelter Me episode premiered in NYC at the School of Visual Arts Theatre on April 7, 2016 and was a wonderful event filled with animal-lovers and leaders in NYC animal welfare. Attendees also got the chance to meet the talented man behind MUTTS, Patrick McDonnell! See photos from the NYC premiere on Facebook >>

Here is the first strip, which highlights the story of Cindy, found alone in an apartment after her owner died. When she arrived at our Manhattan Care Center she was scared and trembling. She was also very overweight and had a slight lameness in her back leg. Our Foster team went right to work to secure a home where Cindy could transition slowly and gently from her previous life with one owner and prepare herself for a new home environment. The team called on Brenda. Brenda had fostered over 100 cats and was excited to welcome a dog into her house this time. Cindy was the perfect choice! After spending a month together, losing weight, getting used to meeting new people, it was time for Cindy to make her big debut at our Mobile Adoption Event. It didn’t take long for Jamill, a member of Army Reserves, to fall in love and just like that a family was made. Many thanks to Brenda for giving Cindy the time she needed in her home.

Shelter Me is an inspiring series that celebrates shelter pets with positive and uplifting stories. Click here for more information.

Wysteria came to our Manhattan Care Center as a stray in mid-November. She was friendly and cooperative with everyone from our Medical staff to our behavior and adoptions team. However, Wysteria tended to stay in the back of her cat-condo, and wasn't getting noticed by potential adopters. Our Feline Enrichment team began working with this happy but shy kitty to teach her to high-five people who approached her condo. Wouldn't you know it, a few days later she caught the eye of Pholomi, a local artist and chef. According to Pholomi, Wysteria is a loving, social cat who loves to be the center of attention and she is still giving high-fives to everyone she meets. We think that deserves a big high-five!

Will You Accept this Carrot?

Finding love is not just a quest reserved for humans. And like humans, animals have their own way of meeting their perfect match. For rabbits in New York City one of the best places to find eligible mates is at Animal Care Centers of NYC. Every Sunday (by appointment) ACC rabbit love wrangler and volunteer Amy conducts speed-dating sessions where owners will introduce their bunny to some shelter bunnies. These speed-dating sessions allow bunnies owned by a pet parent to test the waters with adoptable bunnies. During these introductions, Amy keeps a close eye on bunny body language to determine which hare pairs are best suited for each other. Dozens of rabbits are brought in and soon the field is narrowed to the top 3. Sometimes there just isn't a match and as was the case with Bes, she will return to the care center again in the hopes that she too will have a final carrot ceremony where she selects her mate. That promises to be the most dramatic carrot ceremony ever.

We have dozens of rabbits seeking a home just like Hopscotch, Tonya and Ivory Lilly (pictured above, left to right).

Find your own Bunny bachelor or bachelorette by visiting one of our Care Centers, checking online at nycacc.org or by downloading our adoption app (ACC of NYC)! 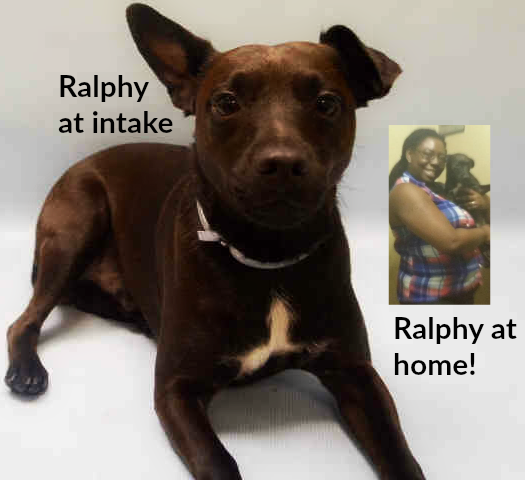 Thousands of pets go missing every year. In NYC there is one central location that pet owners can go to if they lose their pet and that is ACC. Because we are the only shelter that picks up and takes in stray animals, we are often the first stop for a lost pet. Ralphy was found roaming the streets and brought in by some good Samaritans. Clearly a family pet, this couple brought in Ralphy and immediately, as we do with every animal that comes to ACC, we scanned for a microchip, checked out lost pets reports and checked other lost pet sites like fido finder, Craigslist and other online lost and found communities. Amanda had filled out a lost pet report through our system and we were able to reunite the family within hours! It was an exciting moment for everyone.

If you have lost or found a pet in New York City, please visit nycacc.org/LostFound

Have you ever fallen for someone just by seeing a picture?  Did you know the same can happen for people and pets? A photograph is the first and most powerful tool shelters can use to promote their pets. At ACC we have been lucky to have skilled volunteer photographers that have been posting wonderful photos and bios of our animals for years. One such photo caught the eye of a couple in Vermont, who had been looking for a companion for their  dog. They would bring their own dog with them to see if the two got along and the rest shall we say, is history. ACC is proud to have adopters come from all over the country to meet and fall in love with our wonderful animals. We welcome potential adopters from near and far, but simply ask that the adoption be done in person. For Tom and Karina the long journey was well worth the prize.

Find your own best buddy by visiting one of our Care Centers, checking online at nycacc.org or by downloading our adoption app (ACC of NYC) available on Google Play and iTunes.

This strip marks the culmination of our visit from Patrick McDonnell. It's a beautiful way to capture the spirit of our animals and of our people - staff, volunteers, fosters, adopters and partners. On behalf of everyone that has been touched by these stories ACC thanks the entire MUTTS family. And don't forget, this all happened because of a wonderful series called Shelter Me, an inspiring look at the wonders of adopted animals and all they bring to our lives. “Shelter Me: Hearts and Paws” (Episode 6) is presented by the Petco Foundation and debuted on PBS in May 2016.